I received a VERY interesting email from a reader, a regional sales manager for a large company, last week. The subject line of his email was, "All salespeople are sick if they are still cold calling."

Intrigued, I immediately opened it, and was pleasantly surprised at the arguments he offered!

Before I get to that, here's a reminder of a basic principle I teach:

Cold calling, quite simply, is ... DUMB!

Not only does it get appointments at a very low rate of success, but worse yet, appointments set by cold calling are usually a waste of time, with a low-quality prospect who probably isn't fully qualified, and ready, willing, and able to buy from you right now.

But I digress. Back to the point of this email...

The "Sickness" of Cold Calling

The explanation behind this has to do with a principle of psychology defining the seven character defects that cause people to behave the way they do.

These character defects are called "Learned Behavior." The good news is that, when addressed with Behavior Modification solutions (BMOD), they can become "Unlearned Behavior," but it takes longer!

Now here's where it gets interesting: Salespeople as a whole have some HORRIBLE "Learned Behavior"!!!!

I see it all the time as I'm out with reps who have years of experience, and over those years, have picked up terrible habits, saying things that are totally irrelevant and have nothing to do with the prospect's needs - all the usual suspects such as, "We have the best service," "We're the marketing leader," blah blah blah.

But the worst learned behavior of all is COLD CALLING.

It blows my mind that SO MANY valuable, and extremely effective, alternatives to cold calling exist today, from long established self-marketing strategies, to the Internet, to social media, to good old-fashioned networking and relationship building, and so many, many more.

But due to learned behavior, otherwise intelligent and capable salespeople get up every day and begin wasting endless hours cold calling instead!

The bottom line is that most salespeople fail, not because they're bad salespeople, but because of this "Learned Behavior" that has essentially programmed them to do things that don't work anymore!

I Used To Be A Failure, Too

When I started out in sales, i was a miserable failure myself, because I was told over and over again, and had it endlessly drilled into my head, that I MUST cold call. When I objected and said it wasn't working, I was told to cold call even more!

THIS IS THE DEFINITION OF INSANITY!

When something isn't working, the answer isn't to do more of it. It's to change your activities and your behavior to something that does work.

And guess what? Cold calling DOES NOT work, not anymore, not in today's economy!

The solution, therefore, is to STOP cold calling and START doing something that works instead! 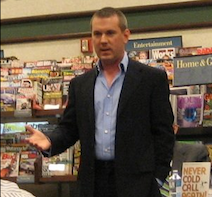 New York Times best-selling author Frank Rumbauskas is the author of the Never Cold Call Again® System and has won numerous accolades, such as Readers Choice for Business Book of the Year from 800-CEO-READ, and has been named one of Fast  Company’s top 30 most influential people online. To learn more, and to  download a free 37-page PDF preview of his Never Cold Call Again  lead-generation system, visit http://www.nevercoldcall.com/