« Who Cares If The Glass is Half Empty or Half Full? There's A Third Option | Main | The ULTIMATE Sales Call »

Every election season, I contemplate going into the business of a campaign manager or consultant.

Because political campaigns are years - no, decades - behind the times when it comes to sales and marketing. Some are slowly getting with the times, but they’re nowhere close yet.

Even basic things like configuring email servers to make sure a candidate’s emails go into the inbox, not spam box, aren’t being done. This is a 10-15 minute job that anyone with a basic knowledge of email deliverability can do, and yet political campaigns aren’t getting it done.

It frustrates me to see a candidate I like, sign up for his or her email newsletter, only to have all the emails to go my spam box.

However, one candidate’s emails not only arrived in the inbox but appeared to be whitelisted by email providers.

Trump blew away his competitors by a huge margin that was totally unexpected, and it’s because did something different.

He never used pre-rehearsed talking points, he didn't repeat lines given to him by his handlers, and his speeches weren't written by speechwriters.

And he was the only candidate who did all this. Which made him genuine.

Meanwhile, everyone else in the field had let a bunch of outdated dinosaurs of campaign managers run their campaigns, and it showed. If you ask them why they didn't differentiate, the way Trump has, they will tell you, “This is the way it’s done,” or, “That’s the way we’ve always done it.”

Sound familiar? Something tells me more than one sales manager has told you that....

Trump’s business advice has always been excellent, but it’s observing his campaign strategy that really tells all - and can help YOU to explode your sales.

Trump outright rejects the idea of “That’s how it’s supposed to be done” or “That’s the way it’s always been done in politics.”

Even if Trump didn't win the presidency, he'd still have made hundreds of millions of dollars through books deals, TV shows, movies, and the like.

How You Can Do The Same

Emulate Trump. Love him or hate him, he’s right. By emulating his attitude of rejecting “The way it’s always been done,” you too can explode your success, make a name for yourself, massively increase your sales, build a fortune - the possibilities are endless.

And it all starts with rejecting the bad advice you get day in and day out of “That’s the way it’s done.”

Here’s a better idea: Start using new-school, cutting edge systems and strategies that get leads and sales on autopilot, and watch how everyone is in amazement of you. They envy your success. And they’re not sure how you’re doing it while they’re all “playing by the rules.”

It goes beyond stopping cold calling. It takes a next-level commitment: To learn and implement the secrets that get sales pouring in, while you make a star of yourself like Trump has for himself and everyone envies your sudden and new-found success.

Reject the idea of doing things "the way they've always been done." Differentiate. Be different. Do something different. And prepare for Trump-like success.

To your success,
Frank J. Rumbauskas

PS: Just to show that I practice what I preach, notice my new headshot photo below - I specifically asked the photographer to make me look like Trump!

Frank has been developing and improving company sales processes and marketing strategies for countless clients since 2003, and thousands have attended his sales workshops and seminars. When you’re ready to massively increase your revenue and greatly reduce sales force turnover, contact Frank at frank@frankr.me 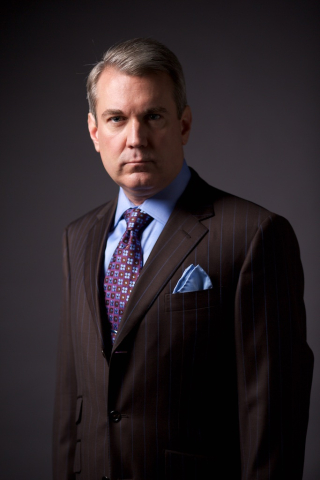