How To Increase B2B Sales Over The Christmas Season

It's the most wonderful time of the year! Well, for most of us it is - and in the sales world, that means retail sales.

But what about the rest of us in sales? For us, December can be a pretty tough time of the year. If you're in B2B sales, it can be difficult to get appointments with prospects. And if you're selling to consumers - say insurance or real estate - it can be almost impossible to have a great month.

When it comes to selling, the holiday season reminds me of an economic recession: It seems bad on the surface, but it's actually a hidden opportunity! Here's why:

During a month when people are preoccupied with Christmas shopping, making holiday plans, traveling, hosting guests and so on, for every prospect who is unavailable, guess what - just as many salespeople are unavailable!

That means your competitors are just as distracted and slacking off at work this month as everyone else!

And when your competition isn't doing their job, it's a golden opportunity for you to swoop in like a hawk and take their business.

"This can be your biggest month, every year."

That's what my best sales manager ever used to tell me. He'd get so frustrated each December, when he knew full well that there were plenty of prospects out there who were not only ready to BUY but were in fact frustrated that they couldn't get salespeople to pay serious attention to them.

He told me that if I would put as much effort into my job each December, instead of just assuming that it was a "bad" month, it would actually be my BEST month every year.

For the exact same reason I explained above: Because my competition (and even my co-workers) were all slacking off instead of focusing on making sales.

So here are some tips on how you can make December your best month, each and every year:

1. Pretend it isn't December. You may have heard me talk about the mistake most salespeople make of slacking off at the beginning of each month and scrambling to make quota at the end of each month, which leads to inconsistency - top salespeople treat every day the same, regardless of which time of the month it is. The same is true right now - just because it's December doesn't mean you should assume you won't sell much. In fact, the opposite is true: By becoming determined to make it the BEST month of the year, you will!

2. For B2B Salespeople: Business owners like myself have a tendency to make large purchases in December, for the simple fact that if we want to get our tax deductions in for the year. Now, a word of warning: Never tell a prospect they should buy because your product is a "tax deduction." This will only make you look foolish and ignorant, simply because virtually all business expenses are tax deductible! However, timing is important, and it won't hurt to remind a business owner or executive that they might as well take advantage now and reduce this year's tax bill.

3. For B2C Salespeople: This is where it gets tricky. Since most of my subscribers in B2C are in insurance, finance, or real estate, I'll cover those big three first.

If you're in insurance or financial services, use the same tax pitch I just mentioned for B2B. Perhaps someone has been putting off opening a personal IRA or 401(k) and you can use this opportunity to remind them that if they take action now, they will get the tax advantages on this year's tax bill. If you're a real estate agent, you can pitch the first-time homebuyer tax credit to potential first-time buyers. (For all of these examples, you need to focus specifically on the prospects who are in these categories.)

4. Remember New Year's! Just about everyone has New Year's Resolutions of some variety. Individuals set goals. Businesses also set goals - new targets and plans for the new year. Remind prospects that if they take action now they'll be all set and ready to go when January 1st arrives.

But most important of all ... remember that this time of year, your competitors are slacking off! Which means it's time for you to pounce! Take action now! Attack!

Treat December, not only like it's no different than any other month, but also that it will be your BEST month, and guess what - it will be!

Thanks again for reading, and happy selling! 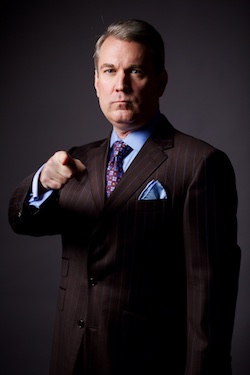