The Reality of Social Media Selling

Social media is the big buzzword right now in sales, and in small business marketing. Everyone wants to know how to sell with social media.

In fact, I sent a survey out to existing clients not too long ago, asking what they would like my next book or product to be about, and a whopping 56% voted for social media.

So, with that in mind, I want to lay out the facts, along with my opinions (which are based on real-world experience), on social media:

First of all, social media is fantastic. It certainly has its place in the world of selling and sales prospecting. But, is it the end-all and be-all that many people are making it out to be?

A successful salesperson - or small business owner - will use any and all efficient and effective tools at her disposal. This means that even though social media can be effective if used properly, it should never be the only method used to attract new customers.

Let's use Twitter as an example: Twitter literally exploded onto the social media scene and it wasn't long before you saw the blue Twitter logo just about everywhere. As a result, tons of salespeople and small business owners immediately jumped in, trying to use Twitter to get new customers.

The problem is that Twitter is not the best-suited avenue for gaining new customers; it is most effective in retaining existing customers and getting them to come back for repeat business. A local restaurant will do great announcing their daily specials on Twitter, but for many others, it can be a total waste of time.

On the other hand, LinkedIn has been phenomenal for NeverColdCall.com because nearly all of its members are in sales in one form or another, but if that coffee shop were to try to promote on LinkedIn, they'd be wasting their time and money. (And to clarify, I don’t really consider LinkedIn to be a social media site - it’s really a business networking site.)

So, the bottom line is that social media does work, but it only works where it's appropriate for a particular business/industry and its target audience, and where it's used correctly.

Can social media work for salespeople, or for a small business?

BUT - don't expect it to provide you with 100% of your leads. Don't let your guard down and think you can eventually stop all of your other lead-generation activities just because you're fully engaged with social media.

But you can - and should - use social media to supplement an existing lead-generation strategy, that employs multiple techniques that hit prospects and the target market from different angles.

As an example, a Facebook page or Twitter feed is a great way to continually follow up with interested prospects and keep them on top of your business and your offers, and of course to keep you in their minds for when they're ready to buy. But you still need a solid lead-generation system to get people to "like" your Facebook page and follow you on Twitter in the first place.

When you learn that much of the hype about social media is just that - hype - and realize that it's just another set of tools you can use to enhance your existing lead-generation platform - a very effective set of tools when used properly - you'll be using it the right way and will profit from it very effectively.

New York Times best-selling author Frank Rumbauskas is the creator of the Never Cold Call Again® System and has won numerous accolades, such as Readers Choice for Business Book of the Year from 800-CEO-READ, and has been named one of Fast Company’s Most Influential People. To learn more, and to download a free 37-page PDF preview of his Never Cold Call Again lead-generation system, visit NeverColdCall.com 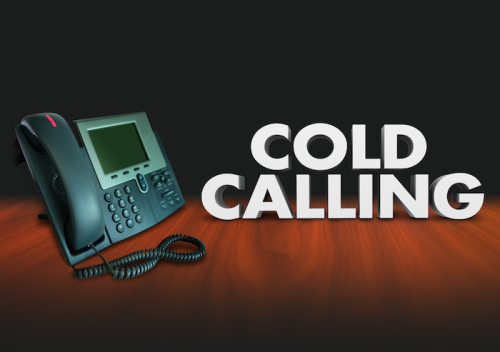 A study featured in Forbes magazine concluded that salespeople using social media to prospect vastly outsell those who cold call for new business.

Yep, it's true. But it's really no surprise, is it?

Here are the facts:

- 78.6% of salespeople using social media out-perform those who aren't

- 40% of salespeople have closed deals via social media

And my favorite statistic of all in this report:

How much of their time do cold callers spend prospecting? That answer is easy:

And that's the biggest flaw of cold calling of all: TIME.

"But cold calling works for me!"

I hear that one all the time. In a conversation I had with Jeffrey Gitomer a while back, he said that salespeople always tell him, "But I make a lot of money cold calling!"

His reply: "You and I have different definitions of the term 'a lot.'"

Salespeople who think that cold calling "works" for them really don't understand the value of their own time. Or, they place no value on their time at all.

Forget all that, and think about this: If you're relying on cold calling for your sales leads, you are using up a HUGE, TREMENDOUS amount of your time to accomplish that!

The recent Baylor University study on cold calling concluded that it takes 7.5 HOURS of cold calling to get one - ONE! - truly qualified appointment.

Every morning, when I check my LinkedIn inbox and read messages from former cold callers, there are always at least a few who mention how much more free time they have in their lives, and how astounded they were to finally realize just how much time cold calling was costing them - and how draining it was both physically and mentally.

Think about this: If you can cut the time you now spend on sales prospecting in half, and spend the time saved face-to-face with hot, qualified prospects, just how much more would you sell? I'm willing to bet the number would astound you.

That's what you can do by switching from cold calling to social media for prospecting.

The best, and most promising bit of data in the Forbes report, was this:

That means you can really excel and destroy your competitors if 3 out of 4 have not made the effort to learn.

If they're doing that well with no training on the subject, just think of what you could do if you made the effort to really learn the ins and outs of social media selling!